Past spotlights of ALWCA Members 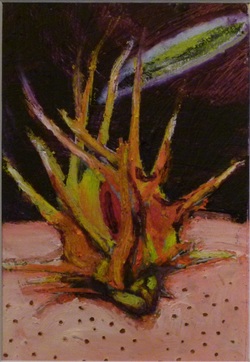 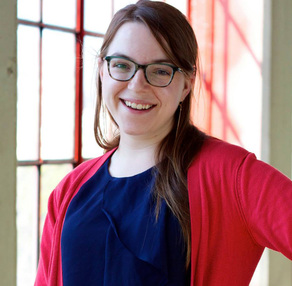 My art is not black and white.  Sure, it’s black ink on (usually) white paper, but it is not straightforward in the subject matter.  I love to hear the different stories that people pull from my work because they are often very different from what I was thinking about while making the piece. 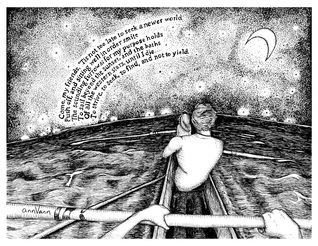 These stories and narrative are the main themes that connect my work.  I am an unabashed bookworm, and this comes through in my explorations of folktales, history, science, and nature.
Visually, I am most interested in pattern and texture, and how these can affect the illusion of depth within a two-dimensional piece. My choice to focus mainly on black and white allows the viewer and me to focus on the intricate marks my pen makes on paper. Please step into the world of my art, and bring your stories with you.  I’d love to hear them. 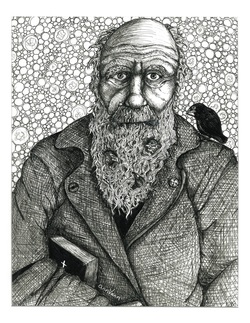 Ann Vann was born in Tucson, AZ. She lived in several states including Pennsylvania and Texas before earning her BFA from Birmingham-Southern College in 2010. She began exhibiting primarily pen-and-ink work in 2014.
Vann currently lives in Huntsville, AL, with her husband, her cats, and her cactus collection.
You can follow Ann Vann on Facebook, Instagram, and Twitter @AnnVannArt. 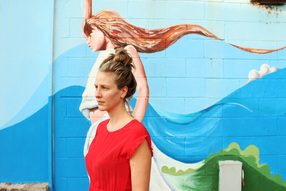 After graduating from the University of Memphis, Diana Harrington began a career in finance. While working long hours on a fixed income trading floor, Harrington started taking photographs during her lunch break, cultivating her photographic eye. Because of these photographic expeditions, Harrington began to take a serious interest in pursuing a career in the arts. Whether it’s passing strangers on the street or documenting empty car lots, Harrington tries to capture and unconventionally expose the enchantment of a typical setting using natural contour and lighting.
Harrington primarily photographs with 35mm film, enjoying its imperfection and the delayed gratification of the analog process. She has only recently incorporated digital photography into her work. In addition to her growth as a photographer, Harrington is an illustrator of fanciful and humorous all occasion cards. Often finding inspiration in her beagle, Pepper, Harrington has a growing collection of cards that make use of personified animals that are occasionally accompanied by fictional words.

Diana Harrington was born in Nashville, raised in Memphis, and currently lives in Huntsville, Alabama. 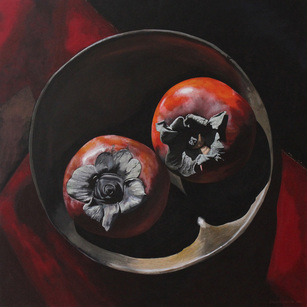 Artist Statement
As a fine artist, Karen has explored many styles and mediums, viewing this exploration as a necessary part of the creative process. Over time, this array of styles has narrowed to the one that continually surfaced with the strongest voice. While taking a photography class during her college years, she discovered a love of strong directional lighting that created graphic shadows.

Kimberly is an artist and a teacher, who makes visual stories from dreams and memory, intuitively layering color to create imagery, offering the beauty of spontaneity and the element of surprise.  Her work was featured in the “Celebrating Our Own” exhibition at the Huntsville Museum of Art, and the B16: Wiregrass Biennial.  She received a BA from the University of Alabama, Huntsville. ​Her studio space is located on the third floor, #324, of Lowe Mill Arts and Entertainment. 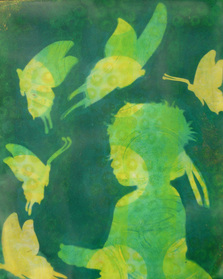 Artist Statement
I combine mono printing with mixed media to build up layers of pattern and shape to uncover the mysteries of dream and memory. Each piece begins life as a mono print, built by intuitively layering color to create imagery, offering the beauty of spontaneity and the element of surprise. The mono printing is not so much used as a printing technique but as another tool, allowing me to subtly form layers, which develop complexity, tension, and richness. I add more color and shape with layers of paper, paint, and wax, overlaying the piece with symbols and meaning. The layering lends itself to the ambiguity of the subconscious, which in turn creates a visual dialogue between the viewer and the work, letting the viewer bring her own interpretation to each piece. 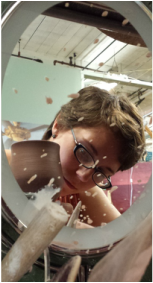 Sara Bowen is a South Alabama native, currently working and making pots in her studio at Flying Monkey Arts in Huntsville, AL. She first learned to throw pottery on a trip to China in 2005, followed by intermittent study of ceramics throughout high school and college as an intern and impromptu student with studio potters from Mobile to Birmingham, AL. 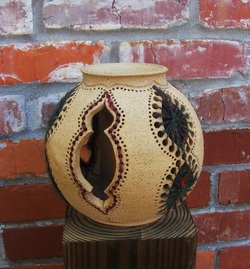 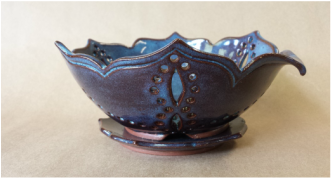 Bowen's surfaces typically  juxtapose rough clay and smooth glaze, organic and sharp lines, oscillating between the precise work of the hand/desired perfection of the mind, and the organic work of nature and the potter's wheel. 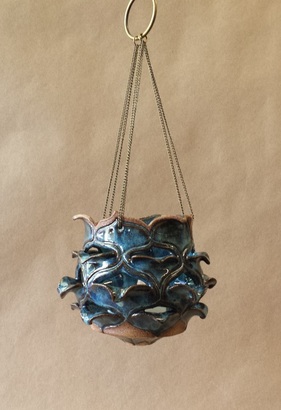 After completing a Bachelor of Arts degree in Art History in 2012, Bowen began tying together a career as a potter. She's been making work in her studio at Lowe Mill since 2014, and became a full-time potter in fall of 2015.

Artist Statement
With a passion for function, beauty, and the wheel-thrown form, Sara Bowen creates pottery that aims to please both the eye and the hand. Both her functional and decorative pots are often filled with drilled holes and incised lines undulating across their forms in curves and petals. 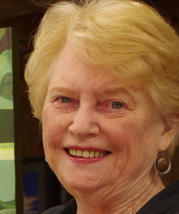 Helen Vaughn has been making art of one sort or another since she was a young girl. Today she lives in Huntsville and paints in a studio nestled in the trees behind her home.
While perhaps best known for figurative work, she is also widely recognized for her landscape and still life paintings. Widely exhibited regionally and nationally, Vaughn’s work has had many solo exhibitions, and her paintings have been featured in national publications including American Artist and Pastel Artist International. She has won numerous awards and her work in included in museum, corporate and private collections.
Most recently, her work was included in the invitational exhibition, Celebrating Our Own at the Huntsville Museum of Art, May-August, 2015. A small figurative painting, Watcher, is included in an exhibition, Intimate Spaces, currently on view at the Union Grove Gallery at UAH until July 2, 2016.  Visit Vaughn’s website, www.helenvaughn.com to see a wide selection of her work. 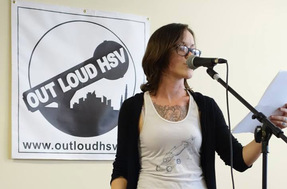 Kimberly Casey is a Massachusetts native with a love of wandering, writing and creating. She received her Bachelors of Fine Arts in Writing, Literature and Publishing from Emerson College in Boston, MA. In 2014 Kimberly founded Out Loud HSV, spoken word and literary arts collective dedicated to creating a welcoming platform for language, writing, and communication to flourish. Through Out Loud HSV, Kimberly hosts open mics, poetry slams, workshops and featured performers to expose audiences to a diverse spectrum of creative writing within our community. Kimberly has performed spoken word all over the country, and has a self-published book of poetry, ‘Learning to Love Anchors’. For more information on Kimberly and Out Loud HSV visit www.outloudhsv.com. 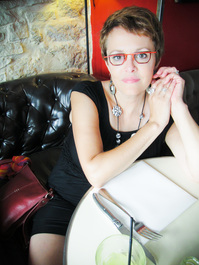 I’m interested in exploring the connections between the past and present as well expressing the complex nature of humanity in combination with mortality and time. I’m interested in how people disappear over time and space. I often investigate these connections in art works using mixed media, oil and encaustic painting, and digital collage using historical photographic materials, fabric, paint, and electric light. In working with historical photographs, often images without names, places and dates of the subjects, I wonder if there is any living person who is knowingly still connected to these people. Have the people just disappeared? Their stories are also missing and I make my own narrative that considers other social and historical dilemmas. I have degrees in both Photography and Painting and the work is often a synthesis of both mediums.
Biography
Visual narrator Cindy Wagner tells stories through several artistic mediums including photography, digital image making, mixed media, and painting. She holds a BFA in Painting from IUPUI Herron School of Art and Design in Indianapolis, Indiana and AS in Visual Communications/ Photography from Ivy Tech Columbus, Indiana. Her creative work can be seen at 3andahalfmuses.com and at her studio at Lowe Mill. Cindy is very interested in exploring the connections between the past and present. She often investigates this in her mixed media and digital work based on historical photographic materials.
She is also the owner/artist of Wagner Photographics and Crimson Blu - Indian Wedding Photography and has worked in the photographic industry the last ten years. 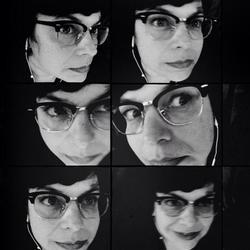 Associate Professor Kathryn Jill Johnson received her BA in studio art at the University of South Florida and her MFA in drawing and painting from the University of Georgia. She has had work in exhibitions across the US. This spring, she was selected for a small group exhibition at the Huntsville Museum of Art, “Celebrating Our Own”.

While she is influenced by the southern tradition of narrative figure painting, her work focuses mainly on drawing. Painting and mixed media elements enhance the mark making, and reassert the shallow space of the picture plane. Her work is influenced by psychoanalytic theory, symbolist poetry, and absurdist humor.
Artist’s Statement
So I am making drawings, little broken narratives, funny and a little sad. I like making the marks, the feel of the surface against my pencil or brush. All the while wondering about how we are thrown into the world, in the present, with the past pulling even as we face into the thick air of the future. What gives weight to experience? Remoteness in time, proximity to the body, and the possibility of intervention—this is what I am parsing out. It’s impossible, of course, and silly to try. Still, there I am in my studio pondering the eternal rule of the same or the hypoxic water in the gulf and I hit my thumb with a hammer: Bang! I am in the moment like best the Buddhist in the monastery. Ha!